C&G Holsters will custom craft your specific holster to exactly what you need.

C&G will handle the rest.

One of the best iwb holsters I have used. Comfortable and very concealable. 10/10 recommend!! 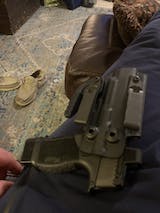 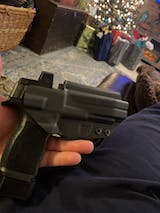 Let customers speak for us

The dark wing works well, and for some this may be a positive, but the texture of the face that received pressure of the belt get caught on the inside of the pants. It’s nice in the sense that it won’t slip out from the pressure of the belt, but I’ve found other varieties do not have that issue. So really it just makes putting on or taking off the holster more difficult.
Great construction though, works well when in place, and the 3 hole variant is great for holsters with only one screw where the wing attaches.

Phenomenal product. Fit and finish in immaculate. No sharp edges or rough spots. My VP9 locks in solidly. I highly recommend it. Please make a long slide version.

Love this holster. Gun fits great and they even included a nice hand written thank you card for purchasing. Good company. With a good gun belt and this holster, it makes carrying the FN a breeze. Using a Kore belt. 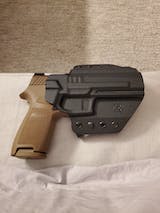 I am able to wear this holster with a soft shell Orvis coat as concealment. Holster design is excellent keeping my CZ-P07 tight to hip. Exactly what I was hoping for in a OWB holster. Product shipped quickly also. Definitely recommend.