Why Kydex holsters? Well let’s start with the history of Kydex and how it got started being used in holsters.

According to Wikipedia:  Kydex sheeting was originally produced in 1965 by the chemical manufacturing company Rohm and Haas. Initially, the intended use was for aircraft interiors. In 1987, the product line was purchased by Kydex LLC (formerly Kleerdex) a subsidiary of Sekisui SPI which manufactures the material in Bloomsburg, Pennsylvania.

Then in 1995 the Kydex revolution began. Blade-Tech founder Tim Wegner ruined a few toaster ovens in his kitchen in early attempts to make some Kydex knife sheaths. Wegner’s wife lovingly requested he move his budding business to the garage (where most companies are normally started). When friends pointed out to Wegner that one shouldn’t bring a knife to a gun fight, the business began to focus on Kydex gun holsters.

Fast-forward 25 years. Due to functionality and popularity, Kydex (and Boltaron) holsters have taken over the market. The disparity in quality is vast. Most guys sandwich heated Kydex between thick foam sheets and a basic gun mold and vice them tightly together until they cool. Some have figured out how to use a rubber membrane/vacuum combination and those same molds for a slightly different style of forming.

That leaves your professional holster companies (such as C&G). We create a 3-D image of each firearm and then use CNC (Computer Numeric Controls) machining techniques to create standards of quality and consistency that are unmatched in all of our holsters. Since C&G started with a foam press and heat gun, through honest hard work and growth we understand Kydex on all levels of production. Through the latest technology, we implement our standards, artistic value and requirements into all our holsters at the design stage. Through CNC technology, we repeat it every time down to .003 inch! For the customer, that equals consistency and quality in every C&G Holster.

Let’s also talk about thickness; C&G Holsters uses .080 inch and .093-inch-thick Kydex-100 sheeting for all our holsters. We have found (though hard usage as Law Enforcement Officers) that .080-inch thickness Kydex-100 is the perfect blend of durability and size for our holsters. And unlike leather, C&G Kydex Holsters do not need a “break in period”, do not collapse on re-holstering and last a lifetime.

***We also recycle all of our Kydex scrapes, overage and extras***

As for colors C&G has one of the largest selections period. Below are some of the colors we have: Thank you for your interest in the products and services of

What does this limited warranty cover?

parts of a product that proves defective because of improper material or workmanship, under normal use and maintenance.

What will we do to correct problems?

C&G Holsters will either repair the Product at no charge, using new or refurbished replacement parts.

How long does the coverage last?

The Warranty Period for Physical Goods purchased from

C&G Holsters is for the lifetime of the product under normal use.

What does this limited warranty not cover?

This Limited Warranty does not cover any problem that is caused by:

What do you have to do?

To obtain warranty service, you must first email sales@candgarms.com or call 724-858-2856 to explain the problem and together we can find the most appropriate solution for you.

What is your current lead time?

Our current lead time will always appear at the top of the home page in RED. We do our best to ship ASAP.

What kind of warranty does C&G Holsters offer on all products (Holsters, Mag pouches)

100% lifetime warranty for regular use. Click here for details.

We sure do! drop us a line at the contact us page and we will get you a coupon code!

I bought one for my Sig 1911 with the square slide and a surefire x300u and it fits like a glove. The holster sits nice and close to the body for excellent concealment. I will definitely buy another for my other guns.

Let customers speak for us

Use this holster for law enforcement patrol functions as K9 handler. Don't have to worry about my remote falling out or this holster breaking under pressure. Very durable material and is not bulky.

Fit and finish is great ... Retention is about 90 plus % on the trigger guard . That with a little oil inside I would think would be easy on the DLC coating ....
A canted clip would be nice option to get it off the hook bone a little more !! 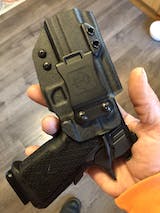 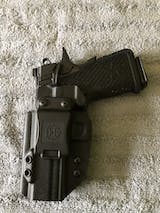 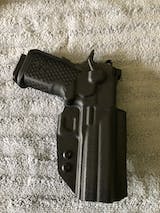 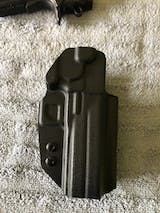 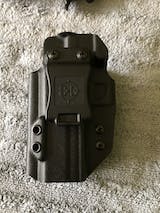 The holster fits the hand gun very well. Fire arm is secure and easy to draw. I am going to have to play with the position of the holster because in my typical position I get sore and it raises a welt after a couple of hours. That is my issue to figure out and not a result of the holster design / configuration.

Was very pleased not only with the product but the customer service was even better. I made a mistake while ordering on line and called to tell them my mistake. Rather that tell me there was nothing that could be done, immediately the problem was address and my order was fixed. Very pleased and I am sure that I will be ordering again in the near future.